The IEMA-Ensemble 2020/21 includes 14 artists: 11 musicians, one composer, one sound designer, and one conductor are part of this IEMA year.
Two young composers recommended by the ULYSSES network in the framework of the ULYSSES Journeys for composers, as well as two composers recommended by the Herrenhaus Edenkoben, and the IEMA composer get the opportunity to create world premieres in two steps.
The project also involves the accordionist Olga Morral Bisbal who joins the IEMA-Ensemble during her ULYSSES Journey.

The new collaboration with the Herrenhaus Edenkoben widens the networking aspect of IEMAs activities in the frame of ULYSSES network as this institution itself offers composers and writers a residency on a scholarship basis.

The first period in April is about “try-out” and “input” under the guidance of the experienced members of Ensemble Modern and an experienced conductor in Frankfurt.

The second period in September contains the rehearsals and concerts including the world premieres at Herrenhaus Edenkoben, Germany on 12. September 2021.

Following these world premieres the program is performed once more in Frankfurt (DE) at the Hochschule für Musik und Darstellende Kunst Frankfurt (HfMDK) in the midth of September.

26./27. April Try-outs in Frankfurt with all composers (live or via Zoom)

Midth of September rerun in Frankfurt 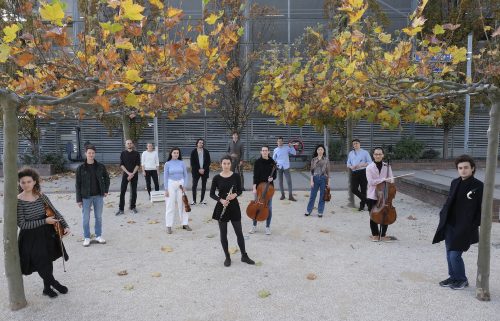