In the framework of the ULYSSES Journeys for Performers, the trio Down the rabbit hole (Hanna Kölbel (cello, DE), Filipa Botelho (clarinet, PT) and Kaja Farszky (percussion, CR)) is having a residency at Snape Maltings (UK) from 16th to 20th December. 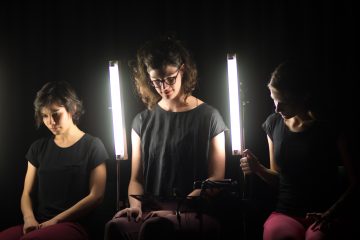 ” Down the Rabbit Hole is a three-piece contemporary music ensemble using a residency to curate and compose an ongoing performance that invades the different musical layers of privacy. They explore the concept of ‘social composing’ – an approach that uses music’s integral role in social relationships – between performer, composer, and audience, or between humans and their online selves, for example – as a basis for compositional material. Working with composer Louis d’Heudieres they create a new piece that elicits responses from the performers as they listen to various soundtracks.

You can discover images and a short video trailer of the result of their residency @ Snape Maltings below.
Their piece Sitzfleisch was performed at FleetStreet Theater Hamburg on 16.02.2019

“The piece is called ‘Sitzfleisch’, a term invented in the 1830s to refer to the way that bourgeois audiences had to use muscle control to sit still throughout a whole musical performance. The piece is a reflection on concert hall listening practice, looks playfully at the act of playing musical instruments, and replaces natural sounds with human-made ones or computer-generated ones.”