Karin Hellqvist puts her violin through its paces in a challenging and innovative new programme, presented during ULTIMA Festival on Tuesday 13 September 5pm at Sentralen, Oslo (NO). 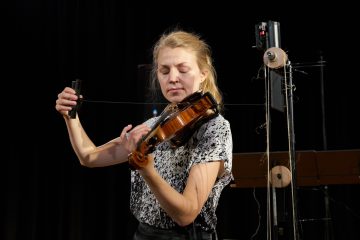 The Oslo based Swedish violinist premiers works of five composers who each test out the limits of this most traditional of instruments :

In collaboration with EXPERIMENTALSTUDIO/ SWR (DE)

The Oslo based Swedish violinist premieres the work of five young composers who each test out the limits of this most traditional of instruments. Marisol Jimenez amplifies a prepared violin in a piece inspired by the rituals of the pre-Columbian Wixárika tribe. A violin with gut strings and Baroque bow is required for Evan Johnson’s piece, a fragmentary and elusive complex of canons chasing after the ghosts of the Baroque Passacaglia. Jan Martin Smørdal places the soloist at the centre of eight loudspeakers representing a group of people to explore the relationship of the individual with the mass. Carola Bauckholt’s evocation of a natural glade includes sampled birdsong mimicked by the violin. Marianthi Papalexandri-Alexandri’s Solo for Violin and Motors is a continuous stream of sound generated by the performer’s interactions with small electric devices.