I’m heading back from my final ULYSSES audience research trip to the Ultima Festival in Oslo, Norway’s main annual contemporary music festival. I conducted the very last survey of the audience research project at this installation by German composer Alexander Schubert. Since I’m aiming to explore the reception of different concert formats, I wanted to include at least one event that completely breaks with the standard concert setup. Schubert’s work Control provided ample opportunity to investigate this. Taking on themes of surveillance and manipulation, audience members were let into the installation in groups of four, wearing headsets and VR goggles. Nothing was projected onto the goggles, instead these were used to support a camera and to restrict the participants’ peripheral vision. Once inside, the participants received instructions over the headset from a controller who could view the footage from their participant’s camera. They were told to move through the space and, as far as possible, interact with the performers, who were distributed in different darkened rooms in the sprawling basement of the former Norwegian National Gallery. While the performers never spoke to the participants and also had their faces obscured with goggles, all sorts of different and strange interactions took place, from having to copy yoga-style positions in an eerily lit room to lying down in a gloomy tent with the instruction to close one’s eyes and relax (as happened to me). 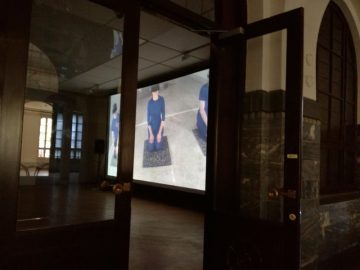 In the second part, the participants became the people controlling, giving instructions to the next batch of audience members before emerging from the basement and becoming ‘observers’ – in a room upstairs, the footage from all four participants’ journeys was being relayed on live screens along with the audio from the controllers. It was also possible to buy an observer ticket and just watch the installation from this room, from which, as was probably Schubert’s intention, it would have been hard to tell who was really ‘performing’ and who just ‘participating’.

All in all, a provocative and unsettling work with multiple ways of engaging with it. I handed out the questionnaire to both participants and observers as they exited the venue. From this, I got 88 responses from the 100 audience members who attended across the two days the installation was open, 23 from observers and 65 from participants. The questionnaire had two questions that were asked in addition to the main set I’ve asked at every other survey. The first of these was aimed to investigate the immersive/interactive dimension to the piece and was differently phrased for participants and observers, asking participants whether they’d enjoyed being able to interact with the performers and being a part of the work and asking observers if they would have preferred to participate. At a first glance, the responses seem very mixed, as might be expected for a work that certainly does not shy away from pushing audience members’ comfort zones. On the whole, it looks like most observers wouldn’t have wanted to participate on the basis of what they saw of the work, though some acknowledged they may not have been able to judge this sufficiently (‘Observation does not really give you [an] impression about the piece’). A lot of participants did say that they enjoyed being active in the work (‘unpleasant in a good way’ was one comment on this), which speaks to the possible gains of a format like this one, but others seemed to have reacted negatively to this aspect of this work.

For the second extra question, I wanted to see if the participants would report their experience as being more memorable than the observers (by asking both groups to rate their agreement with the statement ‘I had a memorable experience at Control’). I’ll have to look at this properly once the data is typed up but it seems as if observers were indeed slightly less likely to call their experience memorable. The result of this question will be interesting in discussing further what audiences can get from participatory formats – do they necessarily make more of an impact?

Another aspect that came up a few times in responses was the amount of information available about the work prior to the event. The composer had specifically requested that little information about the piece be released in advance, which made for some false expectations about the work and format. One response mentions expecting that the performers would be playing instruments (I had thought this too!), but this was not the case. Another comment highlighted quite precisely the difficult balance in giving enough information about a piece vs. keeping an artwork’s mystery: ‘I am really sad I didn’t know more about the piece before I came. At the same time, it felt exciting to not know anything. Unfortunately, it felt more like a scary movie than a music piece.’ 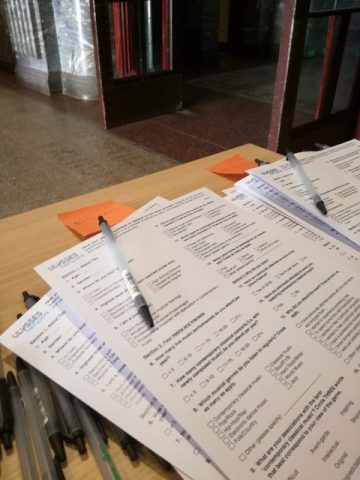 So overall, a very interesting end to my audience research journey! Thank you again to all the organisers and volunteers who helped with the survey and, of course, thanks to all the audience members who took part. I hope to continue the blog and post some results before too long, watch this space!