At the occasion of the Gaudeamus Muziekweek in Utrecht (NL), the ULYSSES Network partner institions and international guests will gather for the ULYSSES DAYS and a Network Meeting. 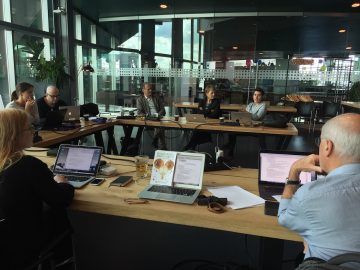 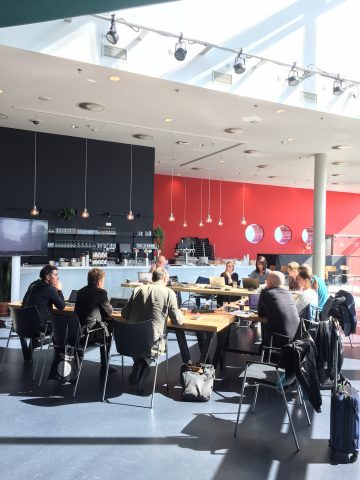 Starting with the ULYSSES Network partners meeting on 6th and 7th September and a gathering for international participants of the festival including composers and musicians, the ULYSSES DAYS in Utrecht allow to discover several ULYSSES projects:

Don’t miss this short video about the ULYSSES Days

Ben Taffijn from Nieuwe Noten writes a review about some of the ULYSSES presentations @ Gaudeamus Muziekweek. You can read the translation of his review here:

Gaudeamus has been organizing ‘Saturday Night at TivoliVredenburg’ as part of the music week for a few years now. Say a music festival within a music festival. There is of course to enjoy contemporary composed music, but there is always a lot of other music on this evening. From free-jazz to danceable electronics, from music theater to performance art and everything that moves just about in between.

And so we first saw a project from the Ulysses Network. First we heard the Ulysses Ensemble, led by Lucas Vis with ‘5 things that really matter in 2018’ by Mikolaj Laskowski, then ‘Dépaysement’ by Yongbom Lee, performed by the IEMA ensemble, led by Lautaro Mura Fuentealba and finally concluded both ensembles together, first directed by Fuentealba and then by Vis, first ‘a su sinuoso paso‘ by Javier Quislant Garcia and then ‘Vaporized Tivolo‘ by Anders Hillborg. The last piece dates from 2010, the three other works were world premieres.

From Mikolaj Laskowski the Ensemble Nikel performed his vision on ‘Outer Space’, the film by Peter Tscherkassky. A violent piece in which free-jazz, post-rock and noise come together in a penetrating way. One thing and another applies in full to his ‘5 things that really matter in 2018’. Through a series of violent sound bursts Laskowski drags us directly into his arena. The Ulysses Ensemble throws up an impenetrable wall of noise, interspersed with field recordings and other electronic sounds. The quieter passages, there are also, are just as hermetic, impenetrable and frightening. Special are the tableau vivants that the musicians further down as part of the piece. As overwhelming as Laskowski’s piece sounds, Lee’s “dépaysement” sounds so subdued. Particularly the first part offers beautiful musical vistas, through a long, transparent sounding arc. Also nice how Lee slowly increases the tension in this piece to the second part in which the percussion plays a big role. Elegant and driving at the same time. Garcia’s ‘a su sinuoso paso‘ is a very exciting piece in which flattering sounds get free rein, like paper in the wind. And at other times it even sounds theatrical. The latter also certainly applies to ‘Vaporized Tivoli’ by Hillborg. What evaporates here is of course the amusement park in Copenhagen. The winds sound like a runaway big band, or fanfare if you wish. Melodic fragments are rearranged by Hillborg in an entirely new way to an exciting piece.