I’ve just returned from my northernmost Audience Research trip yet, this time from Finland’s Time of Music festival in Viitasaari (FI). The ULYSSES audience survey was handed out on Saturday night’s main event, a production of Heiner Goebbels’ ‘Songs of Wars I Have Seen’ (2007). This event presented a number of interesting aspects to consider from an audience experience point of view. The work is in Goebbels’ own hybrid ‘staged concert’ format, in which lighting effects and speech (in this case, fragments of texts from Gertrude Stein’s memoir, ‘Wars I Have Seen’) are woven into the overall composition, creating a new form of music drama. Furthermore, like several other ULYSSES Network partners, Time of Music is an academy, a type of new music institution offering workshops and courses for young composers alongside a festival programme open to the general public. In such settings, contrasting types of audience member can come into contact, in particular, contemporary classical experts and attendees with little or no musical background. 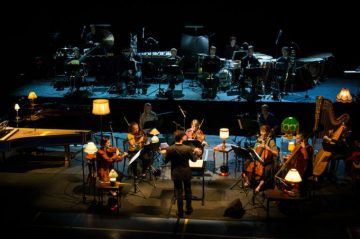 The survey got a fantastic response at Time of Music: 91 returned questionnaires from the 116 audience members present! We offered the survey in Finnish and English and the public seemed to be a mix of younger, English-speaking academy participants (i.e. contemporary classical music professionals) and older Finnish visitors, mostly from outside Viitasaari. In my analysis, possible differences in opinions and in associations with contemporary classical music between these two groups will be a point of focus. As for the reception of the piece, it appears that this was largely very positive. The ‘staged concert’ format provoked longer written responses from some of the audience members, with one noting that ‘it was very interesting how it approached storytelling’ and another expressing the wish to read the full text, as it was ‘difficult to absorb every word’ over the course of the hour-long work. It will also be interesting to see if other features of the production were actually a specific source of motivation for certain audience members, such as the Gertrude Stein texts themselves or the involvement of players from the Finnish Baroque Orchestra (the composition calls for period instruments such as the lute and harpsichord as well as modern instruments), which may have attracted Finnish attendees who already follow the work of this ensemble.