After Time of Music in summer 2016 also impuls is hosting Trio Accanto, one of the most prestigious chamber music formations dedicated to contemporary music. The trio has premiered more than 70 works and now offers the rare chance to participants of impuls 2017 to work with them (both composers and instrumentalists are addressed for this program).

As first step impuls was calling for scores amongst the composer participants of the impuls Academy 2017. From the pieces handed in Trio Accanto selects compositions to both work on and perform itself, but also to be studied and presented by instrumentalists participating in the Academy.

Workshop with impuls instrumentalists and composers: 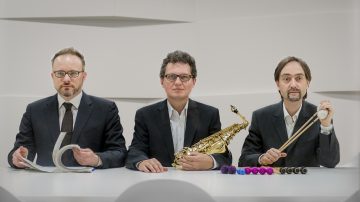 In the framework of their ULYSSES-Journey, the selected performers

also participated to following concerts during the impuls academy and festival 2017:

organized in partnership with Time of Music - FI