Ultima Remake is based on the simple idea of taking a work of music and enabling young teenage students to re-create the work using easily accessible technologies. It is an outreach project for high schools that raises awareness for the role of art in society.

The students are introduced to one or a few specific works, which relate to the festival program of the year, and explore how the social, political and aesthetic context of the work relates to their own experiences and artistic understanding. This reflective process is the starting point for the creation of audiovisual installations and performances that combine new technologies and low-tech material.

In the framework of the ULYSSES Network, the Remake project 2019 is a collaboration between the three ULYSSES partners Ultima, Flagey and IRCAM. This particular Remake edition includes students aged 14-16 from Oslo, Brussels and Paris.
«Rituals» is the common theme that serves as a starting point for making their own artworks.

An app specifically developed for this project makes it possible for the students to record sounds and share the recordings with each other across borders, using their own smartphones. The students from each city are given a reference work chosen by the three different partners. All three works are exploring rituals to different extent. This allows the participants to engage in a contemporary «classic» or a new commission, and further «remake» this piece into their own piece of art.

In Oslo (NOR), the Ultima Festival is collaborating for the project with the Elvebakken videregående skole (Elvebakken high school) and the teachers Atle Næsheim, Linda Haagensen and Bjarne Kvinnsland.

The participating young people are encouraged to engage with contemporary music in practical ways. This year, Remake focuses on transforming Lasse Thoresen’s piece Sound of the Arctic, which opens the festival (12/9).

With its environmental theme and strong focus on sounds in nature, Sound of the Arctic is an ideal material for the students of VG1 sixth form college in Oslo to get their hands on, and they have been exploring it in connection with the idea of rituals.

During a workshop period between March and June, supervised by composer and field recordist Bjarne Kvinnsland, students are collecting, analysing and reprocessing sounds of snow, ice and flowing water (using a special mobile app designed specifically for this project). In the process they learn about spectromorphology and the art of virtuoso listening. 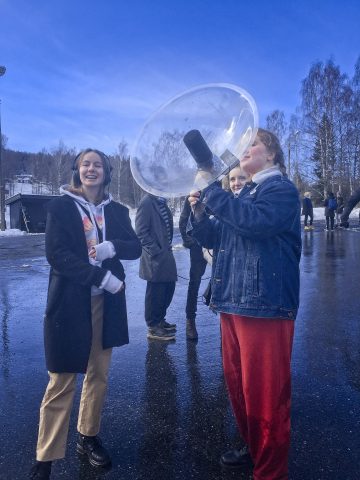 The final production is completed at NOTAM studio in Oslo, and the result is a new sound art piece in its own right which will be revealed at an exhibition and series of performances in the crypt underneath Kulturkirken Jakob, in the framework of the Ultima Festival and from September 13 to 19, 2019.

Some images from the exhibition: